Pregnant Rihanna Is ‘Excited to Be a Mom,’ She and A$AP Rocky Are ‘Cutest’ Parents-to-Be: Source

Rihanna is looking forward to her new journey as a mom.

Following news that the “Diamonds” singer, 33, is pregnant, expecting her first baby with rapper A$AP Rocky, a source close to the couple tells PEOPLE that the fashion mogul “couldn’t be happier.”

“Having a baby is something she was never focused on, but being with Rocky opened her up to the idea. She couldn’t be happier and is so excited to be a mom,” the source says. “She’s loving all the changes to her body during pregnancy and has always celebrated pregnant women in her runway shows for Fenty.”

For more on Rihanna and A$AP Rocky’s baby news, listen below to our daily podcast on PEOPLE Every Day.

Adds the insider, “Everything Rihanna does, she does it her own way on her own time table, and having a baby is no different. They’re just like any other pair of parents-to-be. Yes, they happen to be famous but they’re just the cutest, giddiest young couple that’s expecting kids.”

Speaking of their relationship, the source says the rapper has “doted on [Rihanna]” from the “very beginning.”

“A lot of guys have tried to sweep her off her feet, but Rocky actually managed to do it,” adds the source. “He’s over-the-top romantic and sends her rooms full of flowers all the time. She’s never felt this way before and this relationship has changed her.”

Never miss a story — sign up for PEOPLE’s free daily newsletter to stay up-to-date on the best of what PEOPLE has to offer, from juicy celebrity news to compelling human interest stories.

A second insider says the couple “live together now and seem beyond happy” and that their “friends are excited too” about the pregnancy.

“Everyone is happy it’s all working out. They will be great parents,” adds the source.

The couple was photographed out in New York City over the weekend, where Rihanna debuted her baby bump while wearing a long pink jacket. Her oversized outerwear was unbuttoned at the bottom to reveal her bump adorned in a gold cross with colorful jewels.

In one of the sweet photos, which were snapped in Harlem, where A$AP Rocky grew up, the rapper kisses the soon-to-be mom on her forehead as they enjoy a snowy walk outdoors.

A source confirmed to PEOPLE in November 2020 that Rihanna and A$AP Rocky were dating after years of friendship. That July, she featured A$AP Rocky in her Fenty Skin campaign, and the duo did several interviews together to promote the collab.

Rihanna previously opened up about family planning, telling British Vogue in March 2020 that she was “realizing life is really short” and found a new no-nonsense approach to living.

“You don’t have a lot of time to tolerate s—-, you know? You put so much on your plate. When you’re overwhelmed, you need to start cutting things out. And I’m overwhelmed too much,” she said at the time. “What’s happening now is that I’m going back to black and white. My gray area is shutting down.”

“I know I will want to live differently,” she added, saying that within the next 10 years she sees herself having “three or four” children, whether she has a partner or not. 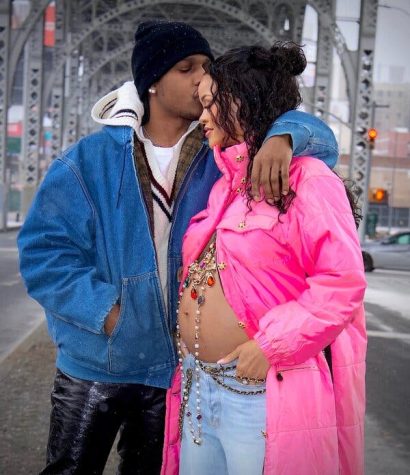