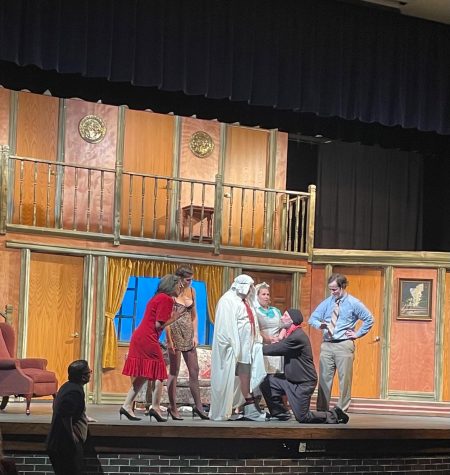 Watch a play fall apart right in front of your eyes. Not really, but really. Northeast’s theatre production is putting on a play, about a play.

The play is a load full. The first act is the cast rehearsing the play and getting prepared for the performance. During this time, tensions are rising within the relationships of the cast. The second act is a different set up. Completely rearranging the setup, turning it all the way around so you can see the back side of the set up. This gives the audience more of a behind the scenes feel. In the third act, the scene is flipped once again as they deliver their final performance.

“Even if you’re not into theatre person, I think people should at least come and appreciate the effort put into the set up.” Actress Aline Skogstoe said. “We were able to make a set that’s 35 feet wide, two stories, and rotating with the help of the construction students. They made this set up in three and a half weeks.”

The theatre has been putting this production together since the beginning of the fall semester. Much time, effort, and dedication went into delivering this performance.

“The play is a sexual farse in British theatre tradition, so there’s a lot of confusion to who is supposed to be where, there’s lot of doors opening and shutting, many people are getting pantsed, and lot of sexual puns are made,” Assistant director Paul Muncy said.

The humor in the production had the audience laughing out loud. The cast members do a great job interacting with the audience too, as they preform off stage sometimes.

“It primary consists of a theatre troupe rehearsing to put on a play. In the second act, the casts relationships start to break down backstage while the play is still going on away from the audience’s view.” Muncy said, “by the time they get to the third act they hate each other so much that they can’t get a long, therefore the whole play fell apart.”

“I think everyone should come see the play because it is absolutely hilarious,” actress Libby McKay said, “I feel like everybody will find something that’s funny to them because it brings a lot of different kinds of comedy to the stage.”

No matter what kind of humor you find funny, you’ll find something to laugh at in this production hands down.

“We all need a good chuckle after the last year and a half and this play delivers that.” Skogstoe said, “there’s slapstick humor, there’s clever little quips, visual gags, and everything so I think there’s something for everyone to come laugh at.”

Since the humor is targeted toward an adult audience, this performance is perfect for college students.

“The show was really funny as it kept going. I was honestly expecting it to be kike a high school production because that’s all I’ve been to before,” student Bethany Borgheiinck, “but the production was amazing it targeted towards young adults, and mature humor.”