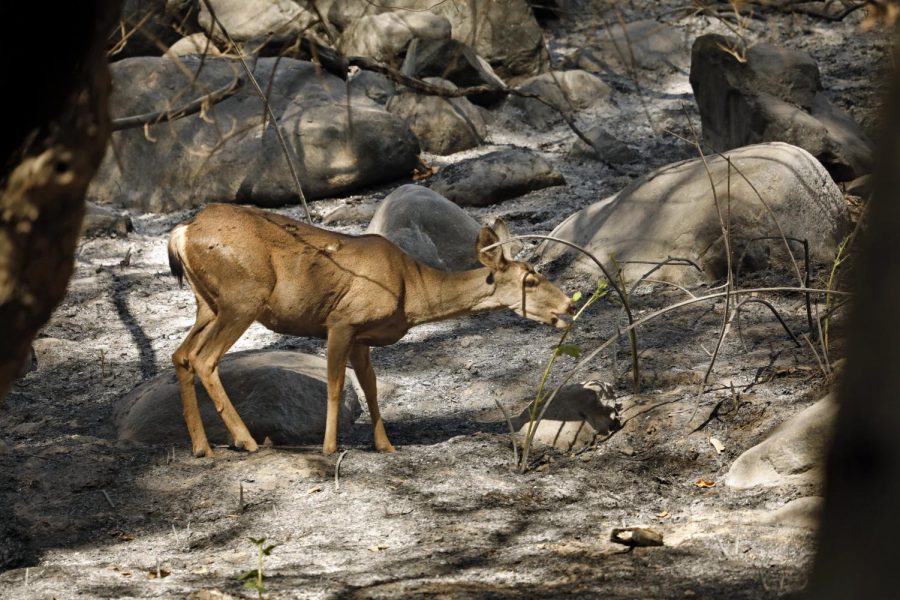 LOS ANGELES — Up until a few weeks ago, the West Fork of the San Gabriel River was one of the most abundant wildlife habitats in Los Angeles County, a secluded and rugged area defined by its steep peaks, lush canyons and mixture of rare and endangered species.

Recently however, a team of federal biologists and forest rangers was aghast when it visited the stream following the Bobcat fire, which has burned more than 115,000 acres in the heart of the San Gabriel Mountains National Monument.

Terrain that once resembled a High Sierra granite gorge now looked like ground zero after a nuclear explosion, and the usually clean mountain air was sharp with the stench of smoke.

Particularly unsettling were the bare and ashen slopes that were now primed to dissolve under pounding winter storms. A heavy mudslide, experts said, could reverse decades of conservation efforts by inundating the last outposts for such federally protected species as the Santa Ana sucker fish and Southern California mountain yellow-legged frog.

“There’s nothing left,” muttered U.S. Geological Survey biologist Adam Backlin as he surveyed the barren, ugly mountains overlooking Cogswell Dam, which controls the flow in an eight-mile stretch of the stream that provides some of the best fly-fishing in Southern California and helps recharge the metropolitan aquifer in the flatlands below.

The exact toll on wildlife along the West Fork and throughout much of the range will not be known until the Forest Service’s emergency response teams determine the extent of the damage in severely burned areas, which, for safety reasons, could remain closed for months to come, federal forest officials said.

Even without that information, the state Department of Fish and Wildlife, the U.S. Geological Survey, the U.S. Fish and Wildlife Service and the U.S. Forest Service are now scrambling to devise post-fire rescue operations to ensure the survival of protected species in the event canyon bottoms are buried in a slurry of rocks, uprooted trees and sediment this winter.

Their options include dispatching teams of state and federal biologists armed with electroshock wands and nets to scoop up as many fish and frogs as possible, then release them into suitable streams elsewhere.

Finding clear streams with cool rocky pools devoid of predatory invasive species will not be easy in an area within one of the most dangerous wildland fire environments in the United States.

“Moving these sensitive creatures around in order to keep them one step ahead of the next environmental disaster is not a strategy — it’s a last-ditch effort,” Welch said. “In an era of almost back-to-back wildfires and mudslides, we haven’t had the time to develop comprehensive survival plans for each one of our protected species.”

The preemptive rescues being proposed across the San Gabriels highlight the difficulty facing biologists and land managers in ensuring the survival of species clinging to existence in Southern California’s patchwork of isolated habitats — areas already hemmed in by urban development and scorched by more frequent and intense wildfires.

Looking ahead, they can only surmise that things will get worse. In a warming world, places such as California will experience whiplash shifts between extremely dry and wet periods — factors that exacerbated the unprecedented fire season this year across the state.

The life and times of mountain yellow-legged frogs embody the challenges facing endangered species — and biologists — in Southern California.

For thousands of years, yellow-legged frogs thrived in hundreds of streams across the San Gabriel, San Bernardino and San Jacinto mountains. Over the past eight decades, the species has been decimated by wildfires, mudslides, pesticides, fungal infections, loss of habitat, flood control facilities and the appetites of nonnative trout, bullfrogs and crayfish.

Today, fewer than 400 are believed to exist in isolated populations, including a group of about 150 in a two-mile stretch of Little Rock Creek, near the resort community of Wrightwood.

Federal wildlife authorities in 2010 launched an ambitious recovery program that included captive breeding at institutions including the Los Angeles Zoo, trout removal in some of their ancestral haunts, and, in certain areas, barring public access.

The recovery program is a collaborative effort funded by donations, grants and California Department of Transportation funds to mitigate the effects of emergency work stabilizing a slope near frog habitat on California Highway 330 in the San Bernardino Mountains.

Backlin, who has been monitoring Southern California’s yellow-legged frog populations since 1998, could scarcely believe his eyes two weeks ago as he watched televised footage of flames marching down into the refuge at Little Rock Creek.

State and federal biologists are also worried about the loss of habitat for 150 federally endangered unarmored threespine stickleback fish that were rescued after the 2016 Sand fire burned through Soledad Canyon in northwestern L.A. County and then released in carefully selected areas of the Angeles National Forest.

Now, with those translocated fish threatened by mudslides in new burn areas, state and federal biologists plan to recapture most of them and return them, yet again, to Soledad Canyon, which over the past four years has become suitable for repopulation.

Then there are the descendants of an estimated 23,000 native fish that were captured in the upper San Gabriel River in 2006 and relocated near the confluence of the West Fork and Bear Creek to make way for a massive sediment removal project in the San Gabriel Reservoir, about 18 miles north of Azusa.

If the West Fork gets buried in mud, Forest Service officials said, it could hasten the decline of the fish species already on the verge of extinction.

In the meantime, in the mountains surrounding Cogswell Dam where the Bobcat fire started on Sept. 6, rare and common animals alike — Nelson’s bighorn sheep, mule deer, mountain lions, foxes and southern Pacific rattlesnakes — continue searching for food and shelter amid the snags and ashes.

“It broke my heart to see a bear with an injured paw and shoulder staggering out of a burned area,” recalled Steven Morgan, operator of the 95-year-old reservoir owned by the Los Angeles County Department of Public Works. “There’s no place for smaller critters to hide anymore, either. Rodents and squirrels have become easy pickings for owls and hawks.”

Aquatic creatures such as fish, frogs and western pond turtles, a state-listed species of special concern, face an even sadder and more diminished future when their domain downstream is slammed by winter flooding.

Overall, wildlife stands to lose in the collision of competing interests across the fire-scarred range, an oblong mass from Santa Clarita to San Bernardino that attracts 3.5 million visitors a year.

County flood control authorities have made a priority of safeguarding critical infrastructure, including catch basins and several man-made dams that provide water and safety for millions of people in downstream communities.

“But our No. 1 goal is to protect constituents down mountain, secure our critical infrastructure and steer mud off the roadways,” she said.

Welch would not argue with any of that.

“Hastily packing up endangered fish and amphibians, then moving them out of harm’s way is not an ideal solution,” she said. “But it can buy us time to care for them for decades, or longer, if possible.”