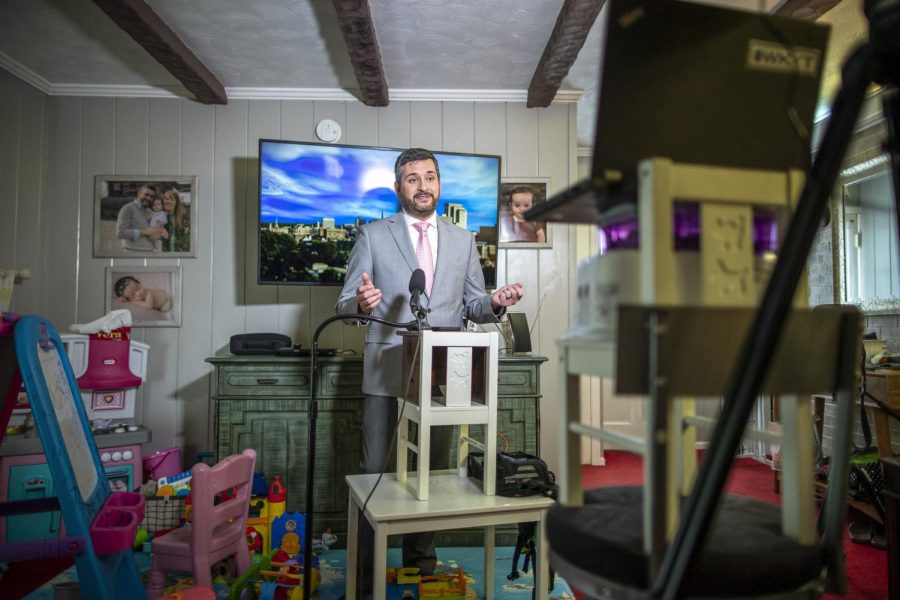 LEXINGTON, Ky. — In this new era of social distancing and working from home, many people are getting used to meeting online. Maybe a few of us have even thought about what’s on the wall behind us.

But what if your living room or kitchen was on display for thousands? Or your dog starts barking, or your spouse or kids wander into view while big chunks of the city are watching?

That’s the dilemma for local TV new anchors doing the news or the weather from their homes. Although news media are considered essential businesses and therefore are exceptions to Kentucky Gov. Andy Beshear’s pandemic shutdown order, they aren’t immune to the coronavirus.

So TV stations, like newspapers including the Herald-Leader, are allowing anchors and reporters to work out of the office, lessening the risk that employees could infect each other.

Many began working from home in early March, right after the first case of COVID-19 in Kentucky was announced by Beshear.

WORKING WITH WHAT YOU HAVE

At WKYT-TV, most reporters and a few anchors are working out of the building. Meteorologist Jim Caldwell does his work from home, as does reporter and afternoon anchor Victor Puente.

After a few weeks, Puente has his new routine down pat. His wife, who works in health care, leaves to take their 2-year-old daughter to day care, and he goes out to report stories. He has to be back by early afternoon to edit at his dining room table and have the camera set back up in his living room in time for his 4 p.m. anchoring session.

“I’ve got it down to about 10 minutes now,” he said. “A lot of it is finding the right angles, because I’ve got the bright LED light, so I do a tight shot so you can’t see the living room behind me. It’s just the TV behind me.”

What viewers don’t see: His toddler daughter’s Ikea table and chairs rigged up in front of him, where he has the laptop set up as a prompter. He also has to keep adjusting the volume on his TV behind him or it times off and goes to black. There’s also a pink toddler kitchen and other assorted toys. Puente’s dog, Vader, is usually there as well

After the news, Puente breaks all the equipment down and puts it away before his family gets home at 5:30 p.m.

This all works great most of the time. Thursdays, when his wife doesn’t work, she takes their daughter on a drive during the news. Occasionally, the timing gets off a bit. Once, they came back mid-story and went to play in the backyard while he wrapped up. The dog saw them and got pretty excited.

And the audio caught it. “It was pretty funny,” he said. “I tweeted it out.”

One thing has changed a lot: There’s pretty much no banter. The anchors now have a three or four-second delay that makes casual conversation really awkward.

Puente said one day he and fellow anchor Amber Philpott, who is still working from the studio, were going to be doing a light-hearted bit, and he was holding his dog. Instead, the delay meant they couldn’t really pull it off.

“I think the viewers might have been a little confused, to cut back to see me holding this dog,” Puente said.

Nancy Cox, anchor for the WLEX-TV, was eager to volunteer when the station started thinking about getting people out of the studio and into their homes for safety.

“I raised my hand first … both my children have asthma, so it’s very concerning to me,” she said. “They came out that day and rigged up a transmitter, a camera and two lights. It’s working great, knock on wood.”

After more than three weeks, she’s adjusted to the constant buzz of the transmitter and having a section of her house turned into a permanent studio.

“It’s pretty much taking up my whole living room,” she said.

But on the plus side, she only has to keep the tiny part on camera tidy for viewers. What is seen on television is that rectangle … I’m real big on set design, so I’m trying to add a few things that add depth, then I got a little playful, added a few pictures that I change out that sit behind me,” she said. “You have to have a sense of humor.”

Another thing she often has with her that viewers (usually) don’t see: her dog. The dog has to be right there, and when Cox speaks in her “anchor voice” she sits at her feet, sometimes watching the whole time. Occasionally she has to send her out of the room if she is getting ready to bark.

Two other anchors, Angie Beavin and Claire Crouch, are anchoring in their houses, and now most of the reporters are working from home as well, so most days no one is actually in the studio when you watch the news. Even weatherman Bill Meck works from home unless there is a threat of severe weather, she said. Even Kevin Christopher anchors in the evening from his desk in the newsroom.

The goal is to protect the rest of the staff if any one person becomes ill.

So they are all isolated from each other. “I’ve been at home for three weeks, and the only times I’ve left the house are for the grocery store and the pharmacy,” she said. “And I feel very fortunate to be able to do that.”

It isn’t as easy working from home for TV anchors as it is for the rest of us: Cox still has to do the full hair and makeup although she has relaxed a bit to wear yoga pants and comfy shoes under her “anchor dress.”

“It’s so hard to turn it off from work to home because work is right here in my face now, 24/7. But I’m learning as I go to set aside time for myself, for my kids, for cooking or whatever and to walk away from the computer for at least a good chunk of hours every day,” she said.

A WAY TO PROTECT THE COMMUNITY

WTVQ-TV anchor Veronica Jean Seltzer, who has been doing the evening newscasts from the studio, usually with co-anchor Tom Kenny, began broadcasting from her home on April 15.

Most of the station’s reporters were already working from home, and Seltzer wanted to as well.

“I’m originally from New York, where more than 10,000 people have died,” she said. That isn’t something she wants to see repeated in Kentucky.

“I’m doing this to protect my community … the virus has proven itself stealthy. So if you can stay home, you should,” she said. “I want to be proactive.”

The station has helped her figure out the technical end, and she ran multiple tests before going live from her apartment on Wednesday.

“It’s exciting. … I’ve rigged up my own prompter, I was up late fixing shadows, and the news director has helped with the ‘set’ behind me,” she said. She hopes it will go smoothly but knows there could be glitches. “I hope anyone watching will be patient while we adjust.”

She’s been impressed watching what other resourceful reporters have managed to pull together while reporting from home.

“It’s pretty amazing what people are doing … I think it’s a testament to how commitment journalists are to delivering the news, no matter what,” Seltzer said. “I feel like local news really has the power, especially right now, to restore people’s faith in us. It means a lot to be able to do this right now. Helping is what’s keeping me going, I think.”