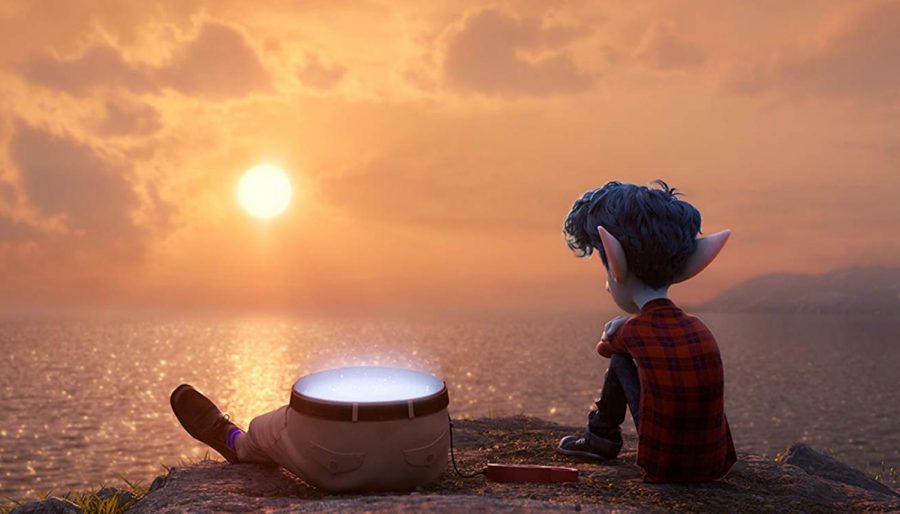 A manic, moderately diverting babysitter of a Pixar movie, “Onward” does gets there by the end — “there” being the place where the freneticism recedes, the main characters’ emotional setbacks and defenses crumble and the audience is encouraged, by every possible storytelling mechanism, to cry along with the teenaged brothers voiced by Tom Holland and Chris Pratt.

The world of “Onward” has lost meaningful contact with its exotic historical past filled with dragons, dungeons, wizards and spells. Life has been gentrified and tamed. The human-like elves we meet include tender, shy Ian Lightfoot and his brash older sibling, Barley. Their father died before Ian was born. The boys and their mother, Laurel, live in the pleasantly conformist-minded town of New Mushroomton, whose residents include centaurs, merpeople, pixies and garbage-scavenging unicorns. It’s a mashup of Middle-earth, a sanitized edition of “Game of Thrones” and the role-playing wonderland of Barley’s favorite game, Quests of Yore.

For Ian’s 16th birthday, Laurel presents the boys with a prearranged gift: a magical spell-casting wooden staff able to bring their late father back from the dead for a single day. It works, almost: Dad returns from the waist down only, unable to see or hear but pretty slick with the dance moves. For kids whose fathers are only half-there in reality, “Onward” may register in more than one way.

The rest of the antsy plot finds Ian and Barley on a deadline hunt for a precious “Phoenix stone” (ripped off from somewhere in the Marvel Cinematic Universe, apparently) to complete the spell. En route there are police to elude, including mom’s officer boyfriend, and a dragon to vanquish. Also there is a brief reference to a lesbian officer’s girlfriend. I mention this so as not to trigger the homophobes in the film’s potential audience, who prefer yesteryear to the more accepting, inclusive hell we’re living in now.

Does it work? It’s one busy movie, though without much variety in its rhythm or much breathing room in its perils. Director and co-writer Dan Scanlon was the chief creative force behind my least favorite Pixar feature to date, “Monsters University,” and while he’s genuinely interested in the mood swings, self-esteem challenges and everyday humiliations of young kids as they navigate through the world, the setbacks and arguments here grow wearying.

Without breaking any new ground, the animation itself certainly holds up its end of the bargain. Pratt in particular finds what laughs there are to be had with Barley, whose life revolves around his beat-up Econoline-type van named Guinevere. (“This has been the world’s longest gap year,” says his mother in passing, voiced just so by Julia Louis-Dreyfus.) Octavia Spencer gives it the sauce as a half-lion, part-scorpion, part comic relief manticore, whose inner beast is dying slowly, by degrees, in her job managing a Medieval Times-esque theme restaurant.

Is it a matter of narrative over-complication that keeps “Onward” from being better? Not really: My favorite Pixar movie, “Ratatouille,” is practically insane in its zigzags and its central premise of a rat becoming a gourmet chef. But something’s off with the dad element in “Onward.” Screenwriters Scanlon, Jason Headley and Keith Bunin keep reminding us of the spell-casting deadline, and of the reason the boys are going through all this mayhem. They have to remind us, otherwise we’d forget.

Like Disney’s billion-dollar smash “Frozen,” Pixar’s “Onward” invests heavily and, in the end, smartly in a sibling relationship that’s not always easy. That part works, in the nick of time. But the storyline’s internal competition and emphasis on DreamWorks-style action sequences sell that theme short. I liked the movie all right. It’s just that “all right” shouldn’t be the goal here.