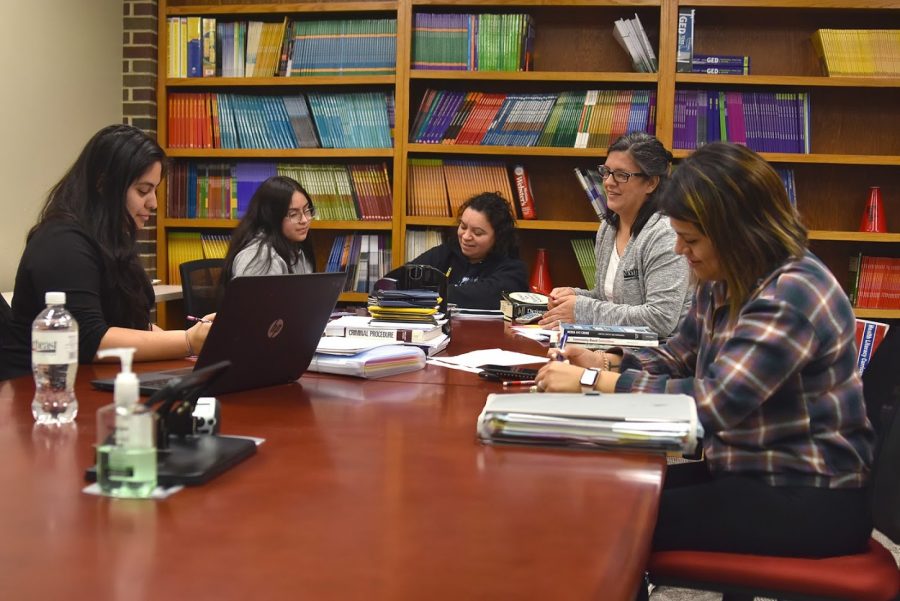 NORFOLK– A Northeast Community College program to train interpreters to work in Nebraska courtrooms is getting noticed, not just across the state, but throughout the nation.

The Court Interpreter Preparation and Certification program began last September to train individuals to use their language skills to assist others through Nebraska’s judicial branch. The program, sponsored through a partnership between Northeast and the Nebraska Supreme Court, is the only one of its kind in the United States.

The Supreme Court’s Office of the Courts and Probation reports that county and district courts across Nebraska are in desperate needs of interpreters.

Since it began, the program has gone quite well. Julie Clark, adult education coordinator at Northeast, has been overwhelmed with how much she has learned from her students in the program.

“They all just have a background that is a wonderful example of ‘if you study and you work hard, you can achieve anything in this country,’” she said. “It’s unimaginable to me to have to put the barrier of language in between yourself and what you want to accomplish. The goals that they have achieved and the hurdles they have overcome just inspire me every day.”

The Nebraska Supreme Court created an Access to Justice Commission with a purpose to provide equal access to expeditious and fair justice for all Nebraskans regardless of income, race, ethnicity, gender, disability, age or language. This includes providing interpreters to 65 of Nebraska’s 93 counties through the Supreme Court’s Language Access Program.

Court interpreters are individuals who possess an educated, native-like mastery of both English and a second language, display a wide general knowledge, and perform the three major types of court interpreting: sight translation, consecutive interpreting, and simultaneous interpreting.

In fiscal year 2019, the State of Nebraska funded 11,148 interpreter appearances, providing language access for 23,127 contacts within the judicial branch. Interpreters served speakers of 49 different languages and dialects in Nebraska courts and probation offices.

Languages include Russian, Dinka (spoken in South Sudan), Ewi (spoken in Togo and Ghana), Hindi (spoken in India), Krio (spoken in Sierra Leone), and Tigrinya (spoken in Eritrea and Ethiopia). The majority of interpreter services provided in Nebraska courtrooms were Spanish, but the need for a variety of languages including Arabic, Somali and Karen (spoken in Myanmar) is steadily increasing.

Erika O’Brien has a background in agronomy and animal science and previously served as a professor of agronomy at the university-level in Mexico before coming to the United States.

“I really liked the idea of helping people. Some people don’t have a voice and this is a way I could help them. I know what it was like to not have a strong knowledge of the language, it can be hard. This is really an awesome way to help those people.”

O’Brien said one challenge for her has been gaining an understanding of the legal system.

“When I am in a conversation, it’s kind of hard to understand sometimes because the legalese is new to me, but there are a lot of terms we use in Mexico in similar situations. I really like to study and have been a good student in that way so that is not difficult for me. But the legal language has been difficult.”

O’Brien would like to become instructor to train the next set of court interpreters through the Northeast program. She has already been signed up as one of the college’s adult education volunteers and teaches English Language Learner classes and serves as a tutor.

One activity that took the interpreter students in the program out of the classroom was an opportunity to witness the Nebraska Supreme Court hear arguments outside of its courtroom at the state capitol in Lincoln.

Clark said hearing the arguments in person at South Sioux City High School was an eye-opening experience. The students, who are all non-native speakers, had reviewed the case files before attending arguments, but she said, “They didn’t truly appreciate the magnitude of the day until they saw and heard the process.”

Clark said that her adult-learners were “very overwhelmed” with some of the vocabulary used throughout the arguments, including references to the Indian Child Welfare Act that was casually referred to as ICWA, for example.

“We have worked very hard on vocabulary, but as an instructor, it was just a wonderful learning experience and I am grateful we had the opportunity prior to their certified interpreter test in November.”

That same month, Northeast’s court interpreter program gained additional attention after the story was featured on the state-wide NET radio network. A few weeks later, the report was aired on National Public Radio.

As a result, officials in Washington reached out to Northeast for a “Train the Trainer” program on how to get a similar program started in their state. Representatives from language programs in Pennsylvania, Indiana and New Mexico have followed up with inquiries to Northeast Community College into making this kind of educational opportunity available in their states as well.

Clark has been invited to present the program at the national conference of the Coalition on Adult Basic Education (COABE), an organization dedicated to advancing the field of adult literacy. In addition, Jennifer Verhein, coordinator of the Nebraska Language Access Program, has been asked to submit a proposal to present the model at the Council of Language Access Coordinators’ national conference this fall.

Now the work of the program is being recognized nationally.

Nebraska’s Statewide Language Access program has been chosen for the 2020 Outstanding State Innovation of the Year award by COABE. Representatives of the program will be recognized during the organization’s national conference this spring in Baltimore.

Members of the Nebraska Supreme Court are pleased with how the court interpreter program has taken off. Chief Justice Mike Heavican highlighted the program during his State of the Judiciary Address to the Nebraska Legislature recently.

“To address (the interpreter) shortage this year, our court’s Language Access Program collaborated with Northeast Community College in Norfolk to provide a no-cost Adult Education course for aspiring court interpreters,” he said. “This program is the first of its kind in the nation and is proving to be very successful. … We hope to expand this initiative in the near future.”