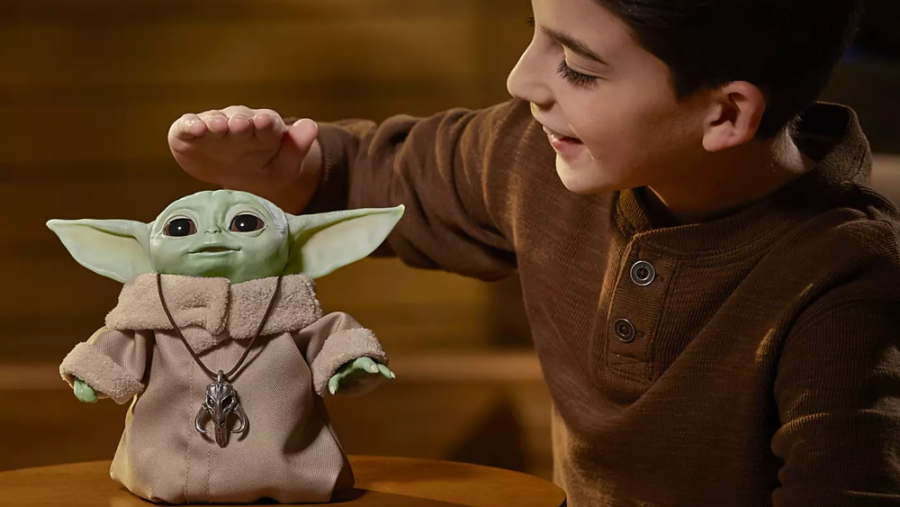 Take our money, Disney can.

The studio giant has unveiled new official merchandise modeled after the Child — better known as Baby Yoda — from “The Mandalorian.” As of Thursday, multiple wide-eyed, green-skinned items are available for preorder, including a lifelike, animatronic replica of the tiny breakout Disney+ star.

“Good Morning America” recently debuted the fresh “Mandalorian” products, ranging from a silver Baby Yoda necklace to a bobblehead-esque Baby Yoda Funko Pop. The star of the show, however, was the giggling, ear-wiggling plush toy, which coos, cocks its head back and forth, blinks and — yes — even wields the Force on voice command.

At the peak of the Disney+ flagship series’ popularity in December, the first licensed Baby Yoda Mattel doll surfaced on Walmart’s website for $24.99 — floppy ears, tan robes and all. Initial feelings of excitement soon turned to betrayal, however, when it was revealed that the hot commodity wouldn’t actually arrive until May.

But as quickly as the alien critter achieved overnight fame, various online vendors capitalized on it by making their own Baby Yoda creations, which have been selling at hyperspeed despite Disney’s attempts to fend off the unauthorized merch with trademark-infringement complaints. Products ranging from cuddly crocheted toys and infant hats to T-shirts and fan art can be found on craft sites such as Etsy, under intentionally vague listings.

Overwhelming demand for a take-home version of everyone’s favorite 50-year-old toddler has even inspired content from comedians like Jimmy Kimmel, who debuted a ridiculous do-it-yourself video last year instructing viewers on how to “make your own Baby Yoda,” involving an adult Yoda doll and a microwave.

According to “Good Morning America,” the latest Disney-approved collectors’ items inspired by “The Child” can be preordered now at most major retailers, including — of course — the Disney store.