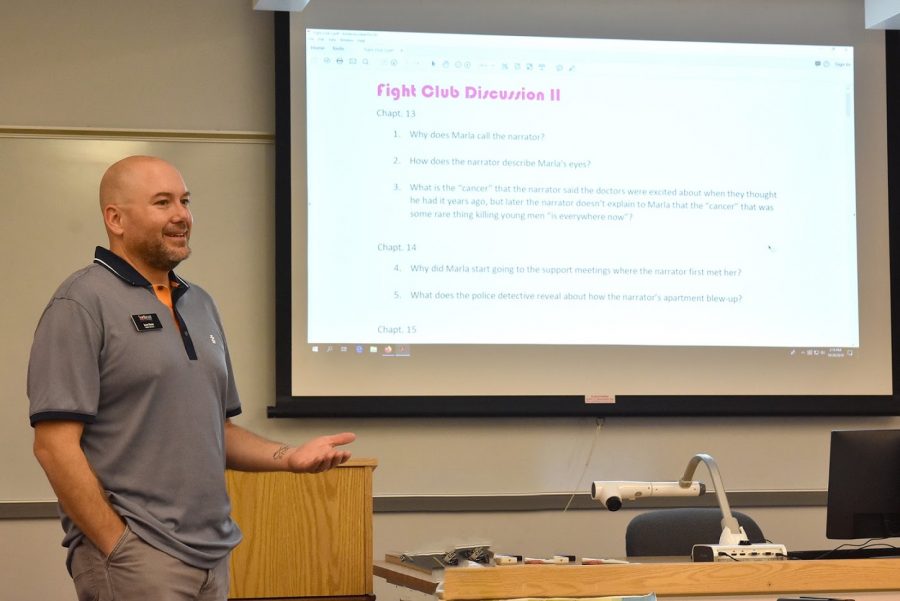 NORFOLK– Countless novels have been made into films. While many adaptations have been successful – whether they have received critical acclaim or have done well at the box office or in syndication – not everyone likes the concept. Two of the students enrolled in a particular course at Northeast Community College this semester are among those with differing views.

“Reading something in a book is always better than seeing it in a movie,” said McKinzie Miller.

However, Pauline Chiungwiza has always preferred watching a film over reading the narrative.

“Sometimes when I’m reading the book, I view a person in a particular characterization. So, I ignore all of the descriptions of a character in a book and use the reference from the movie.”

Miller and Chiungwiza are enrolled in Novel and the Movie, a course that is designed to offer a critical analysis of culturally diverse works of poetry, drama and fiction.

English Instructor Jason Elznic said they spend about a week discussing a book and another week viewing and talking about a film with some other academic lessons in between. He said a significant part of the theory comes down to a discussion as to why filmmakers made the choices they did, while exploring the relationship between films and fiction.

Novel and the Movie revolves around five books and their film adaptations – Psycho, Breakfast at Tiffany’s, Fight Club, The Girl on the Train, and Winter’s Bone.

During a discussion on Breakfast at Tiffany’s, for example, Miller, of Norfolk, did not like the characterization of the main character between the book and the film because she said she had her own idea of that person in her mind. After seeing Audrey Hepburn’s performance of Holly Golightly in the movie, she was disappointed as it did not match how she thought the character should be portrayed.

To a point, the book’s author, Truman Capote, had said that Hepburn was not the right person for the leading role as the character he created was not glamorous and sophisticated as she was portrayed on screen.

But Miller said that is a plus to the course because part of the discussion focuses on as to why a book will not always translate well to film.

Chiungwiza, of Malawi, did agree on that thought. “I feel like (filmmakers) have never made an adaptation of something that’s always accurate,” she said.

“What happens in a novel doesn’t always translate well to film,” Elznic said.

Elznic also experienced disappointment in characterization in Fight Club. He saw the film before he read the book and admits he had a hard time not seeing the characters in the movie while reading the novel. He said, however, the casting of Brad Pitt and Edward Norton in the lead roles was appropriate.

When he started putting together the reading list for the semester, Elznic initially wanted to go with strong female authors and find popular novels that also had really well made film adaptations. However, he said he was shocked at how difficult that turned out to be.

“I only ended up with one book by a female author. So, then I went with strong female lead characters … and I even struggled a bit with a full set of really good solid novels and solid movies.”

Elznic said there is another similarity among many of the characters in the five novels and films. They are all described as being awful people.

“Students tease me a lot on the fact that I tend to pick literature about horrible things. So I thought, ‘Okay, let’s just go with horrible people.’ I looked at what I was finding when I was searching for novels and movies I was interested in and then I just decided to go with horrible people as a theme and go from there.”

He added, “I guess we’re hoping to get positive educational outcomes out of horrible people.”

For Miller, who does not describe herself as a movie fan, she gets to do the one thing she has a passion for.

“I love to read. In this class, I get to read books, I get to read them as homework and I very much enjoy that,” she said. “I love doing discussions on books because I don’t often get to discuss something like that because not many people I know read like I like to.”

Miller said she prefers to visualize characters rather than have a filmmaker provide them for her.

“I don’t really enjoy movies much to begin with. And then when I’m reading the book, I have the idea in my head and then I watch the movie and then I’m completely disappointed. Just heartbroken,” she said with a chuckle.

Chiungwiza admits she reads slowly in order to have a better understanding of a story’s characters. She said she had seen most of the films they have or will watch this semester in the class.

“So I just listen to what everybody else has to say about them. I find this class interesting and fun to talk to people about what we have read and seen.”

She is surprised after reading a book that has been made into a movie since she bases everything in the story on what she experienced in viewing the film version.

“Sometimes when I’m reading the book, I view a person in a particular characterization. So I ignore all of the descriptions of a character in a book and use the reference from the movie,” Chiungwiza said. “But I’m always pleasantly surprised, though, because the books go deeper so you get certain thoughts of characters and why they did something while the movie just sort of shows you.”

Elznic said the objective of Novel and the Movie is to give students the opportunity to explore, discuss and evaluate how a story can play out through two very different versions.

“I think the main intent on having a special class like this – above and beyond what we do in other (literature) classes and what the purposes are – is the fact that movies are for people today what novels used to be,” he said. “I hope my students learn to look at characterization and plot and those kind of literary elements and see those in film and connect the film that way and not just passively.”