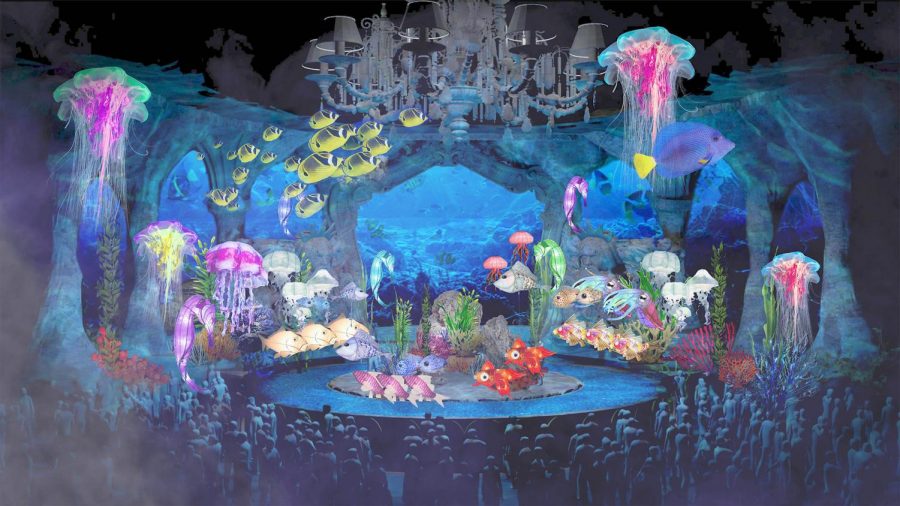 BEVERLY HILLS, Calif. — Imagine a Disney cartoon that melts into a live musical. That’s just what ABC is planning for Nov. 5. And if it sounds a little bit remarkable, it is. The hybrid will commemorate the 30th anniversary of Disney’s evergreen animated movie “The Little Mermaid.”

The special will accomplish that by airing the movie, which will transition into 10 live musical numbers from the movie as well as from the Broadway show.

The live part of “The Wonderful World of Disney Presents The Little Mermaid Live!” will feature Hawaii born singer-actress Auli’i Cravalho as Ariel. Cravalho is best known for starring in the title role of Disney’s “Moana.” Grammy-winning reggae artist Shaggy will portray Sebastian the crab. And the production will costar Queen Latifah as Ursula, the villainous octopus, Graham Phillips as Prince Eric and John Stamos as the French chef.

“The original feature will exist exactly as it always has, and we all love it, and then when we come to a song, we will transition from the original to the new, and there’s a separation of everything there,” he says.

The entire movie is being scored again to create a continuity and flow from one dimension to the other, and it’s being done by original composer Alan Menken.

Menken, with his late lyricist Howard Ashman, wrote the original songs for “The Little Mermaid,” as well as “Beauty and the Beast” and “Aladdin,” though Ashman died before Aladdin was completed (Menken finished the project).

Menken describes how he composes for features. “I try to always let my music come from characters and story exclusively, and not really from me,” he says.

“It comes through me, in a way. And so I think the characters and the stories speak to people, and I’d like to think that the craft of what we create brings that to life in a memorable and provocative way. We try to be true to a stylistic point of view or a particular cultural bend, whatever it is, but always try to have interesting inspiration for songs. And I think that really resonates with people.”

“And I feel like Sebastian is me because after a while, you are watching it, and your girls are there, and because they are reciting every line to it, you’ve got to join in at some point because that’s the only way you are getting points as a dad. And years ago, actually, I recorded ‘Under the Sea’ in 1996. And I kind of did almost like kind of a rap version. It’s funny how things come full circle,” he says.

There’s a trick to selling a song, says Shaggy. “The great thing about making records and singing songs is you have to believe it,” he says.

“I have to sing it to you so you believe it and you feel it. The good thing about ‘The Little Mermaid’ when I watched it, its emotions, and its relatable emotions to people. This is why this story has survived so long because it is relatable to everybody. It’s a love story. There is good, there is evil. All of that is embodied into this. And that’s a part of our everyday life.”

Menken likes that Shaggy incorporated a rap sound to his song. “I generally think of myself like an architect. I design a house that other people will live in,” says Menken.

“And I’ve been very fortunate that very talented people have lived in those houses or built those houses. I’ll be very involved the first time around with something. And then after that, there’s a structure that other people can take on. And it evolves through different forms.”

When he adapted “The Little Mermaid” for Broadway he says he reformulated the piece into two acts. “Going to television, you’re dealing with a whole other format,” says Menken. “So those changes are necessary for that and also (for the) visuals. It’s on a case-by-case basis if I get involved with particular changes. And it really just depends on the project at hand,” he says.

“Generally, I really like kind of being the grandpa. My children are born. They’re out in the world, and they’re finding their own way.”

The show will offer musical moments and, of course, the unpredictable ad libs. Engvall himself started as a stand-up and was mighty handy with the ad libs. But he worked a long time before he was successful.

“When I did ‘The Tonight Show’ with Johnny Carson, I’d heard once you do ‘The Tonight Show’ you’re going. I did it and the set went great, and I sat back waiting for the phone to ring, and it never did. Why is this not working right? That was in the ’90s. I was still in the clubs and hadn’t made that jump yet. I think there’s a reason that God didn’t let me have success when I was young because I would’ve screwed it up. Now I’m older and have a family and I know what’s important,” he says.

“I sign autographs because I understand if it wasn’t for the fans I wouldn’t be here. My fans are the most important thing in the world, other than my family.”

One of the Hollywood losses most devastating to me was that of Bill Paxton, who died at 61 from a stroke following heart surgery. When I last interviewed Paxton he’d already achieved star status in Hollywood with films like “Titanic,” “Twister,” “Apollo 13” and my favorite, “A Simple Plan.”

He was still keenly aware of his place among us and his debt to society. “I’ve had to be compromising at times, but feel I haven’t lived up to my responsibility,” he told me.

“I’ve been very lucky in that I can do more for my family and friends. You’re given talents you either use and exploit for greater good, or you use them for more selfish purposes. Obviously an actor’s life in Hollywood is a very selfish kind of life,” he said.

“We’re in the humanity business, which is a good thing … but I think I’ve been pretty self-centered — and I’ve had to be — and I feel I have a greater purpose that I haven’t completely lived up to. I can organize things. I produced (the movie) ‘Traveller,’ was able to employ people … I can do more of that,” he said.

“My role model is Tom Hanks and people who’ve taken their positions and created things and put a lot of people to work. If I don’t do that, I’ll feel like I have shirked my responsibilities.”

Although Hollywood is quick to jump on the next bandwagon, the Ojai Film Festival will honor Paxton with an award named after him to be given to the best locally produced film at their awards brunch on Sunday. Ojai is a community 80 miles north of Los Angeles where Paxton lived part of the time. His son, James, 25, will present the award.

DeGeneres is just one of five producers on the show (including its creator Jared Stern). The 13 1/2-hour series premieres Nov. 8. Douglas plays Guy-Am-I, with Devine portraying the famous Sam-I-Am. Keaton is the overprotective Michellee.

Keaton confesses that her years of fame from films like “Annie Hall,” “The Godfather Part III” and “Something’s Gotta Give,” have made her what she calls “a little protective.”

“Everyone has a problem dealing with celebrity,” she says. “Even if they’re embracing it completely and they’re totally happy about the whole thing, it’s still a problem. But it’s not a bad problem to have.”