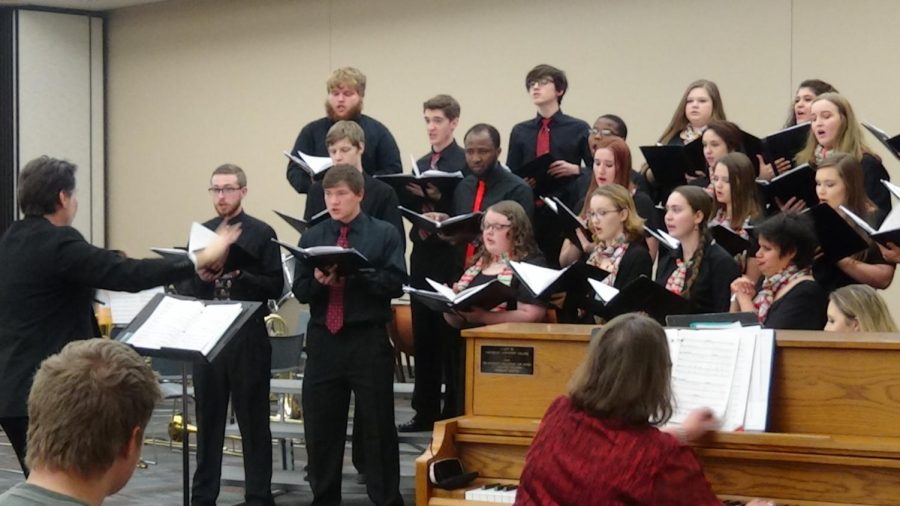 Each season the music performance program hosts a concert to show their vocal and instrumental abilities, as well as share the different meanings with their audience throughout the school year.

The holiday concert is the last concert performed by the Northeast music group as the first half of the school year comes to an end. It is the culmination of the two semesters since it allows students to get into the holiday spirit during their break from classes. The jazz and concert band come together to perform instrumental music for the concert and the choir focuses on vocal presentation, making sure to go along with the theme.

The event was open to the public, students and several people from within the community showed up to the concert, bringing along their families and friends.

Before the concert commenced, Stewart Cramer, director of vocal arts said he was excited for his students and hoped the audience receives the message they were trying to deliver. “I hope the people leave with the longing to be spirited about the holidays, the winter and celebrating the magic of it,” Cramer said. “The holiday concert is all about evoking the feeling of what we get during the holiday.”

The concert represented the winter season and the time that should be spent during the holidays. It included a number of holiday songs, orchestral pieces, as well as Christmas carols which were presented by the band and choir in their individual performances. Cramer and Kevin McLouth, director of instrumental studies directed the event, making sure the music was fully delivered to the audience.

The event went on for an hour and a half, it came to an end with minutes of applause from the audience after the band and choir performed a duet. Cramer and McLouth asked the audience to join in on the last two carols.

The band and choir members said they were excited to be a part of something people were interested in watching “I’ve learned a lot about music and it has helped me improve in the way I present myself when I am performing,” Mcphinley Dzanja, Choir student said. “I learned how to use the make the right postures, how to focus on my pitch, as well as how to use my voice to complement other voices.

Many people within the audience said they were amazed by the way the band and choir delivered their performances. Johnson Mikha, Northeast student said it was exciting for him to see people harmonize and orchestrate the way the band and choir did. The concert was a success leaving students and others with the feeling of celebrating the Christmas holiday and enjoying the start of the winter season.

The band and choir will have their next concert performance on Feb.10, from 2:00-3: 30 p.m., in the lifelong learning center. The winter concert will have a focus on the start of the second half of the school year.