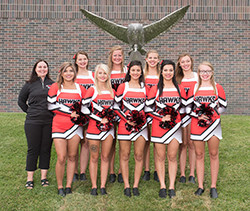 Northeast Community college’s dance team started the 2017-2018 season on a good note with a total of six dancers for the first half of the school year.

The six-member squad performed at a number of home volleyball, soccer and basketball games this fall. Their first performance took place during the women’s basketball home opener against Northeastern Junior college on Friday, Nov. 2, at 7 p.m. in the Cox Activities Center.

They became an official club at Northeast in August during the 2016-2017 school year. The team ended up with 16 members after holding auditions. Dance coach, Amanda Avidano said she used to work in the admissions office before signing up to coach the dance team. Avidano said she signed up to coach the team because she wanted to be a part of something that gives students who love to dance another chance to do it again after high school.

“When Dr. Chipps Mentioned that they were going to have a dance team I put my name in the hat to be the coach and I love it. …,” Avidano said. “There are not many options for dance teams around this area, so if students have a passion for dance it’s really hard for them to continue on once they finish high school. I love that I can help give them an option to continue to dance.

Avidano said that the best part about coaching is observing the students work hard during practice to make sure that they do the best they can as they are performing for everyone else.

The Northeast dance team will perform at more games during the rest of their season. So far the team has managed to give their audience great performances.