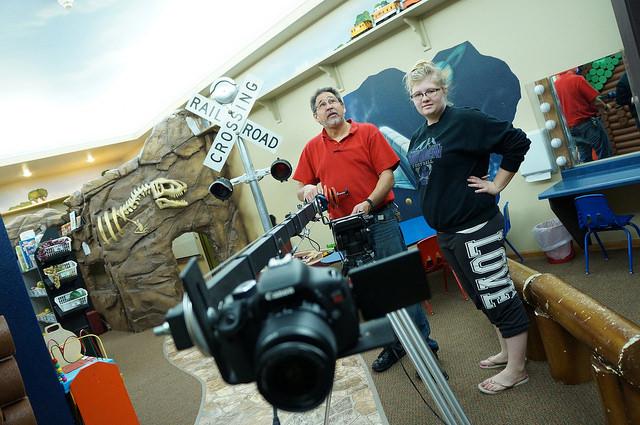 Miller and Hill adjust the camera crane and the Canon DSLR

If you enroll in the Media Arts Program at Northeast Community College, you can expect to spend a lot of time with audio and recording technology and digital cinema instructor Mr. Timothy Miller. Mr. Miller is in his 33rd year of teaching media arts at Northeast and loves seeing his students succeed. He enjoys watching them as they begin to understand and adapt concepts that they will use in their professional lives. “The success of my students is probably the best part of my job,” Mr. Miller says.

Mr. Miller grew up near the city of Akron, Ohio and joined a band at a young age. This is where his love of sound began. After being unable to afford life in a band, he began to rent out his PA system and started working on production which he immediately fell in love with. He attended college at Ohio State, Kent State, Akron, and Wayne State where he primarily majored in electrical engineering and music.

Mr. Miller was hired at Northeast in 1983 while he was a candidate for a Bachelor of Science degree from Ohio State University. After attending multiple universities, he would eventually get his Bachelor’s degree from Wayne State College while working at Northeast.

Mr. Miller and his wife Janet have two daughters McKenzie and Makayla, ages 13 and 15. He says that he absolutely loves working at Northeast and that his daughters will be attending Northeast to get their associates before going on to any other school. “I love my job. I love working with students. I love seeing them just get up and get to speed in respect to their careers and Northeast is just a great place for both faculty and students. My kids will go to Northeast before they go anywhere else.”