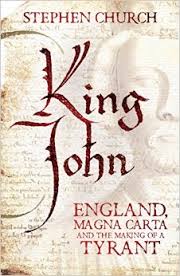 England’s King John was a loser even to his contemporaries back in the 13th century.

However, he’s a very memorable loser who has been remembered for centuries in areas as diverse as popular culture, history and the law.

Professor Stephen Church of the University of East Anglia explains why he mattered in a new biography, “King John: And the Road to the Magna Carta.”

Who was he? John was the lastborn son of Henry II and Eleanor of Aquitaine. He was dubbed “Lackland” because by the time of his birth, the accumulated lands of his parents — England and much of what would become France — were already doled out to his various siblings (which included Richard the Lionheart.)

It wouldn’t matter. In the end, John would inherit it all, then lose most of it.

Church plumbs historical documents, such letters and treaties to recreate the up-and-down life of John. Luckily, like all rulers, John’s reign had a bureaucracy, and bureaucracies run on paper. The portrait of the king is richer for the minutiae Church has mined from archives.

John entered the realm of popular culture with the evil Prince John of the Robin Hood legends. There he’s the evil prince who seeks to leave his noble brother, King Richard, to rot in a foreign prison after he was captured on the way home from the Third Crusade.

It wasn’t as simple as that in the reality of 13th century politics, which Church points out. Still John did try to keep his brother imprisoned. Unfortunately, his letters advocating prison were given to Richard to read before his release. It led to an awkward family reunion when Richard came back.

John ruled for 17 years after Richard’s early death. He had numerous illegitimate children and was “notoriously predatory when around the wives and daughters of his barons,” says Church. He would be involved with the death of his nephew, Arthur of Brittany.

He was also not trusted by his nobles. They demanded of him some paper documentation of their rights. This document became known as the Magna Carta, which celebrates its 800th anniversary this year.

On his deathbed, John, realizing that he had screwed up with everyone, asked for forgiveness to the “holy church for damages and injuries done to them” and begged his nobles to support his sons toward “obtaining and defending their inheritance.” Since at the time, England was in a civil war, and rebellious nobles and a French prince held some of it, the latter wasn’t a certainty.

Church says that John didn’t plan at his coronation in 1199 to be remembered as a bad king. It was just the way he ended up.