Christmas Books That Are Off The Beaten Track 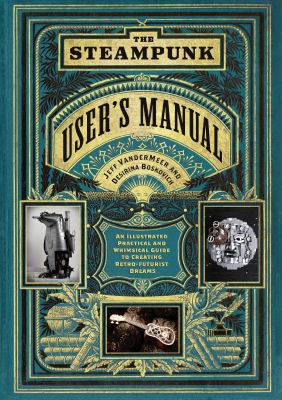 Do you have people on your holiday lists that are hard to buy for because their interests are off the beaten track? Think “Star Wars,” Steampunk, fairies.

You’re lucky — there are presents for everyone out there this year.

While fans await next year’s “Star Wars” movie, they can look back over 37 years of publicity and sales with the latest book from the “Star Wars Art” series, “Posters” (Abrams, $40.) This is a rich source of “Star Wars” history that includes sketches, production drawings and posters. It includes the art for various spinoffs, such as games and radio shows. Another interesting aspect is the decades of changes in the art’s production — you start with paint; you end with digital.

For 40 years, artist Brian Froud has painted mythical creatures. His work has appeared in film in “Labyrinth” and “The Dark Crystal,” for which he served as conceptual designer, and on numerous book covers. His latest book, “Brian Froud’s Faeries’ Tales”(Abrams, $35) is a beautiful and eerie look into his and his wife, Wendy’s, vision of fairyland. Their original stories are based in classic fairy tales. The art is reminiscent of Victorian painters Dante Gabriel Rossetti, Edward Burne-Jones and Arthur Rackham, but with darker undertones.

What is Steampunk? “The Steampunk User’s Manual” by Desirina Boskovich and Jeff VanderMeer (Abrams, $24.95) exists to help you out. Steampunk can be a wildly fantastic mixture of machinery, art and human creativity with Victorian overtones. The manual gives practical advice on its art, clothing, corsets, sculptures and many other items.

There’s also the beautiful “Steampunk Tarot: Wisdom from the Gods of the Machine” (Tuttle, $19.95) by John and Caitlin Matthews and illustrated by Wil Kinghan. With this set of cards, instead of the classic minor arcane of swords, coins and rods, you have airships, engines, submersibles and leviathans. The artwork is stunning.

Finally, how can you have Christmas without Charles Dickens’ “A Christmas Carol?” If you want a unique version, you could get the Steampunk version (Running Press, $18.95) illustrated by Croatian artist Zdenko Basic. While it uses Dickens’ text, in Basic’s art the Ghost of Christmas Present wears goggles; the pictures are set in decorated frames with lacework designs, clockwork gears and spiky snowflakes. It also includes two other Dickens’ holiday stories, “A Christmas Tree” and “The Story of the Goblins Who Stole a Sexton.”