‘The Price of Silence’: The Duke Lacrosse Scandal And The Games People Play 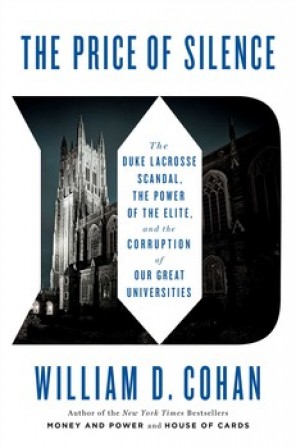 “The Price of Silence: The Duke Lacrosse Scandal, the Power of the Elite and the Corruption of Our Great Universities” by William D. Cohan; Scribner ($35)

The details you may recall of the March 2006 Duke lacrosse scandal are likely scant. If the constant spin of the 24-hour news cycle hasn’t erased all of them from your memory, you may remember that three members of a lacrosse team were erroneously charged with the rape of a stripper after a sloppy if not malicious investigation by the police and the local district attorney.

The lacrosse players weren’t cleared until after a rush to judgment by a media and a public quick to frame the allegations of a black stripper against privileged white youth as a symbol of the enduring conflict of black vs. white and poor vs. rich. The situation was best summed up by a Durham city council member, Eugene Brown: “There are no winners in this. We are all losers.”

Eight years after the fact, author William D. Cohan has provided an account of the scandal in “The Price of Silence: The Duke Lacrosse Scandal, the Power of the Elite and the Corruption of Our Great Universities.” Cohan’s book is as exhaustively researched as it is fair and objective. The level of detail and the rare interviews he scored with disbarred prosecutor Mike Nifong and the accuser, Crystal Mangum, are accomplishments but not the end game.

What makes this book a worthy read is the perspective. Cohan convincingly places the Duke lacrosse scandal within the context of America’s most prestigious universities’ too-often unchecked ambitions.

Though a sexual assault was declared not to have occurred that March night by the state of North Carolina, the lacrosse players engaged in underage drinking, hiring strippers and shouting racial epithets at the strippers. Cohan details how Duke may have set the stage for that misbehavior and for the murkiness that would follow.

In the years leading up to the scandal, Duke wanted to position itself as the Harvard of the South and the Stanford of the East. The former comparison referred to academics. By 2006, Duke was considered the fifth-best university in the country by U.S. News and World Report. The latter comparison dealt with athletics. Duke’s basketball team had been prominent since the 1980s, and the other sports were catching up, including men’s lacrosse, runners-up in the 2005 NCAA Tournament.

“Duke had seemingly become the embodiment of a still-credible aspect of the American Dream: the ability to have it all in just four quick years,” Cohan writes. “There was the first-rate education; the top-notch Division I athletics; the seemingly infinite job prospects upon graduation, especially on Wall Street; the gorgeous campus; the handsome student body.”

Had this growth come at an expense? It certainly would. The scandal ended up costing Duke an estimated $100 million, including an estimated $60 million Cohan reports was paid to the three accused lacrosse players.

Cohan, a Duke alumnus and author of several books about the world of finance, takes us through the scandal as if he’s a third-person omniscient narrator in a work as rich as most fiction. His reporting and selection of news articles detailing the incident and aftermath give you the impression that he was there for all the hysteria that erupted in 2006.

What stands out as you read is how little higher education has changed since then. Universities continue to accommodate arguably destructive influences, whether in sports or social life, and the results can be disastrous. The Penn State scandal is certainly well-known, but top universities such as Virginia, Cornell, Vanderbilt and Amherst have faced repercussions from incidents involving deaths and sexual assault.

In the denouement of his book, Cohan writes that Duke president Richard Brodhead declined to be interviewed. He writes that when he told Brodhead about “The Price of Silence” last year Brodhead asked, “Why do you have to write this book? We are just getting over the events of March 2006.”

The answer is simple: Eight years after the Duke lacrosse scandal’s scorched-earth effect on everyone involved, scandals intertwining universities with some mix of athletics or privilege or alcohol haven’t shown any sign of abating.

Visit the Pittsburgh Post-Gazette at www.post-gazette.com