Building An Indoor 3-D Map On The Spot, Via Smartphone 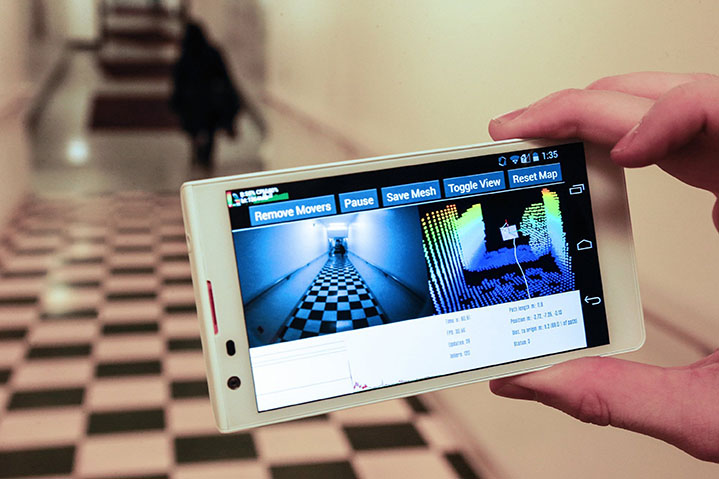 The view from the basement laboratory is breathtaking.

Not the one out the tiny windows of the half-underground office. It’s on a smartphone that computer science Prof. Stergios Roumeliotis is using while walking around the depths of the University of Minnesota’s Walter Library.

On the screen, a three-dimensional map of a nearby hallway has taken shape. The map was made by holding the smartphone’s camera while moving. The camera and the phone’s motion sensor worked together to create a grid of data points that became a 3-D image.

It’s a radical new ability for smartphones and promises to enable consumers to create 3-D maps on the fly. The software development is being handled by UM grad students who are funded by $1.35 million grant from Google Inc. The work is part of the company’s recently announced Project Tango, a cellphone optimized for 3-D mapping.

“We will soon be able to get smartphone directions for how to go from one place to another in a building, such as how to go from the entrance to my classroom,” Roumeliotis said. “We’ll also be able to ask the phone questions, such as, ‘Where is the closest place within the airport where I can get coffee?’ ”

In addition, homeowners could use the software to create a virtual tour of their houses before putting them up for sale, Roumeliotis said. The software could also help the blind walk through a building or aid a drone aircraft in navigating.

While the software is being designed to work on a prototype of the new Google smartphone, it will also work on existing smartphones. Notably, it doesn’t use much processing power, about as much as the game “Angry Birds,” Roumeliotis said.

“I think this is as big a revolution as when Google Maps first came out or even bigger,” said the professor, who is 43 and has been working on map technology since 1995. “It has the potential to become the Google Maps of the indoor world, and this is where we spend most of our time.”

Besides its use on smartphones, the University of Minnesota software is likely to play a major role in 3-D imaging for Google Glass, the company’s wearable computer that has a tiny display above the right eye, Strawn said.

For Glass, the software could create much better 3-D “augmented reality,” a name used today for overlaying a camera image with explanatory information.

One of the key features of the University of Minnesota software is that it creates a map almost instantly without slowing down the phone’s other operations or drawing much battery power, Roumeliotis said.

To do that, the University of Minnesota team had to try some novel design ideas.

For example, unlike most smartphone maps, the new software doesn’t rely on global positioning system data because satellite signals aren’t typically available inside buildings. It also does more with less by combining data from the phone’s built-in motion sensor with just a fraction of the images produced by the phone’s camera.

“We pick which information to process,” Roumeliotis said. “That way we don’t choke the phone’s processor chip or drain the battery.”

The technology is built on some of the university’s earlier work with NASA to create navigational software for Mars landing vehicles, Roumeliotis said.

His group got involved in Google’s Project Tango after one of his former students went to work at the company and recommended the U researchers. The university signed a contract with Google last spring.

Roumeliotis said the software that his group is developing for Google “will be ready within less than a year.”

But Strawn thinks Google won’t offer the University of Minnesota software as mainstream product for several years. That would give app developers time to come up with 3-D applications that can take advantage of the technique.

“It will be introduced in the same way that Google released Glass, years before it anticipated the product would be broadly distributed,” Strawn said.

It’s not unusual for Google to reach out to universities for help in creating new technology, Strawn said.

“There’s a lot of valuable brainpower in the university system, and that’s what Google needs to move these projects forward,” he said.

“We’re on the frontier of this kind of mapping,” Roumeliotis said. “You could map the inside of the Mall of America today using a computing center with a lot of processing power and a lot of time. Our plan is to do that on a cellphone in almost real time, with the time lag getting smaller and smaller.”