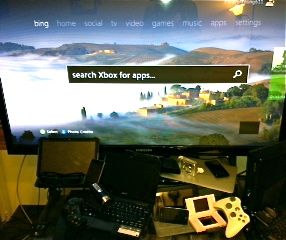 Fifteen years ago bag phones were in cars and the internet was scarcely used by students in the Midwestern schools.  Moving the present, some people are so involved with technology they can not live without it for one full day.

Many people comment how they have several hundred Facebook friends, but really do not know many of them in real life.  Facebook is a media site that has only been around for less than a decade, but asking around campus most students have a profile on this website.

Technology has grown like wildfire in recent years, and has made an impact in most of society.  There is only one question that needs to be answered:  Are we as a society hooked on technology?

There is no clear answer on this fact, but technology makes everything in life easier and very convenient.  Many would say that they are dependent on technology, but there are others that are still living the simple life.

Angie Strong, a non traditional student at Northeast Community College in Norfolk, NE is person that is not reliant on technology to live her life.  Recently she purchased a cell phone, and only uses the computer for homework, shopping and websites related to what her kids enjoy.

Strong recently joined the Twitter sensation, but only did this because she needed to follow a corporation for a class at Northeast.

“I do not care about technology,” strong replied when asked how technology affects her life.

Strong is one in a million that does not use technology daily, and definitely not hourly.  Tyler Bacon on the other hand, uses technology to make his life easier and helps him with college.

Bacon recently had to do a media deprivation assignment for one of his classes.  This assignment involved twenty-four hours without and technology.  To be able to finish this assignment, Bacon had to plan it around his trip to Mall of America in Minnesota.

The time without this technology was torture for Bacon, who sends several thousands of text messages weekly.  Some of his friend actually thought that he had died because he did not text or answer the phone.

Bacon owns two laptops (a macbook and a sony), an Iphone, every gaming system that has been out, a 3D T.V, an Ipad and an Ipod.  There is hardly a minute that he does not use technology in his busy life.

When asked if he was addicted to technology, Bacon commented, “I don’t think I am addicted to it, but I enjoy the advances of technology.”

When Strong was asked if she was technology savvy she said that her sons definitely knew more about technology than her.  Bacon said the opposite, he stated that he is very savvy with technology.

Strong said that there needs to be limitations to what kind of technology is used or society will over use it.  Strong said that computers need rules to keep children safe while on the internet.

Bacon commented that there needs to be some kind of rules to keep things under control.  This is to protect society from going too far with technology and its use.

So put down the phone and get off Facebook, take a walk or read a book to enjoy the simple life that was average only fifteen years ago.  Don’t worry technology will still be there when other pleasures are accomplished.