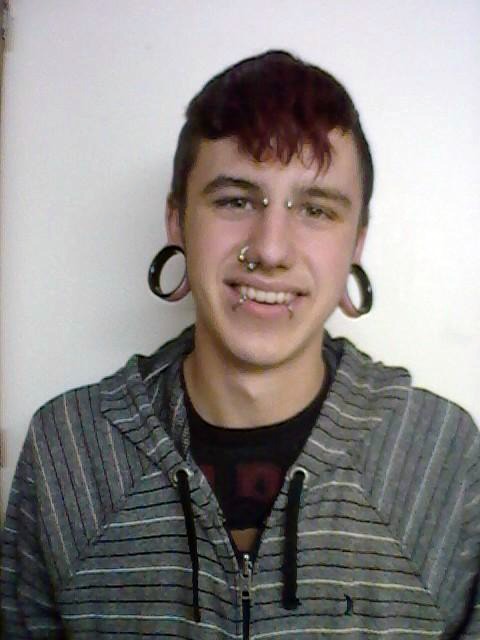 Tyler Grosz, a student at Northeast Community College, has, so far, lived a regular, student life. He grew up on a farm, and went to a small school where he got along with the other students and was pretty popular. However, Grosz is unique because of is his interest in body modification.

Tyler Grosz became interested in body modification at age 15, but waited to get piercings until age 18. It was at this age that he got his first piercings, which were his ears. He also began gauging or stretching them at this point. They are currently at 1 ¾ inches.

Grosz feels that his piercings are an extension of his personality, “I’ve always wanted to I guess. That’s just what I was interested in.”

“I didn’t do it to get attention or anything, they just make me happy.”

Interestingly enough, it appears that his incentive to do so was not rebellion or devil worship. It was an act of expression. How curious.

Yet, it seems that a majority of the citizens in various Nebraska small towns are opposed to his actions.

“I notice a lot of people look at my ears before they look at my face.”

Often, people say things like, “You’d be so much cuter if your ears didn’t look like that,” or, “You’d look better without piercings.”

Others even ask him questions like, “Why?” or, “What are you going to do with your ears when you get older?”

“I respond to people in the way that they ask the question; if they are rude, I answer rudely. If they are nice and straight up, then I answer honestly,” Grosz said.

“If they say it is ugly it doesn’t bother me because I don’t really care what people think.”

Now, Grosz has many more piercings than just his ears. He also has a bridge piercing, snake bites (lip piercings), a nostril piercing, and an industrial (a bar through the ear). He also has a few tattoos. He claims that he will be continuing modification on his body as soon as he receives the money.

Grosz’s plans are to make ear gauges even bigger, gauge his nostrils, get a sub-dermal piercing, and possibly tongue piercing. Not to mention a few more tattoos.

Tyler Grosz’s final statement was, “Body modification doesn’t determine character. People always say things like, ‘You used to be such a nice boy.’ Just because you have a few holes in your face it doesn’t change who you are.”